A HOLISTIC APPROACH TO ECOSYSTEM PRESERVATION

Environmental considerations are at the heart of everything we do at Karingani as we aim to undo past mistakes and have a positive impact going forwards.

A HOLISTIC APPROACH TO ECOSYSTEM PRESERVATION

Environmental considerations are at the heart of everything we do at Karingani as we aim to undo past mistakes and have a positive impact going forwards.

Conservation at Karingani is intended to be sustainable above all else; indeed, this is the very purpose of Karingani. Conservation efforts are strictly science-based, ensuring that investment achieves tangible successes and that the goals of the Conservation Development and Management Plan are met. The importance of conserving Karingani and the flora and fauna within it is a function of its location, but also of the fact that it has been assessed as ranking highly in terms of Global Species Diversity. Not only does Karingani protect a wide range of bird, mammal and plant species, but a number of these are species which are found in relatively few other locations, and/or which are in decline.

Conservation at Karingani is based on the principle that we can only preserve what we understand, and so considerable effort has been put into quantifying and analysing the current and projected status of Karingani, particularly in terms of the population density of large mammal species. These species are particularly important, as it is the charismatic megafauna and predators that largely drive ecotourism demand. Their presence is also indicative of the health of the ecosystem, and the extent to which human activities (specifically poaching) are impacting on it. Offering a diverse, multi-faceted wilderness experience is one of the three pillars on which conservation management decisions will be based. The first is – of course – environmental factors in terms of soil types, vegetation, climate and the availability of water, all of which combine to determine the carrying capacity of Karingani (that is, the number and mix of animals of different species that can be supported). A third factor to be considered is ensuring that conservation efforts within Karingani are cost-effective. Wildlife populations with Karingani have been assessed (by means of aerial surveys) as being below carrying capacity. Growth can be achieved organically as species reproduce naturally, and return to Karingani from other areas of their own accord. More rapid growth can be achieved – at a cost – through translocations of purchased game. Population growth of key herbivorous species (elephant, kudu, nyala, black rhino, impala, sable and wildebeest) are projected to only reach the lower estimated carrying capacity in the mid-2020s. Rates of population growth may be affected by factors outside Karingani’s control, such as the continuation of drought conditions. The reduction in poaching – through the creation of viable economic alternatives for local community members – has also contributed to an increase in animal numbers. There have been confirmed sightings of rare species such as black rhino and suni antelope, along with all the major predator species. Environmental considerations are also apparent in the sympathetic way that Karingani’s buildings and infrastructure have been planned and constructed – that is, we are building with the natural environment rather than against it.

KARINGANI: IMAGINING A NEW REALITY – AND MAKING IT HAPPEN

Karingani’s conservation vision is of a sustainable, integrated and viable approaching to securing the long-term ecological security of an African wilderness.

A partnership between investors, donors, communities, government stakeholders and ecotourism operators to create a sustainable conservation economy. This in turn will facilitate the conservation of the Karingani ecosystem, and promote the wellbeing of the people who depend on it. As a rehabilitated and protected African wilderness, Karingani will then be able to make a regionally significant contribution to transfrontier conservation, and set an example of world-class ecologically, economically and socially sound investment.

of an African Wilderness.

Wildlife: Removing barriers to enable the free movement of animals. 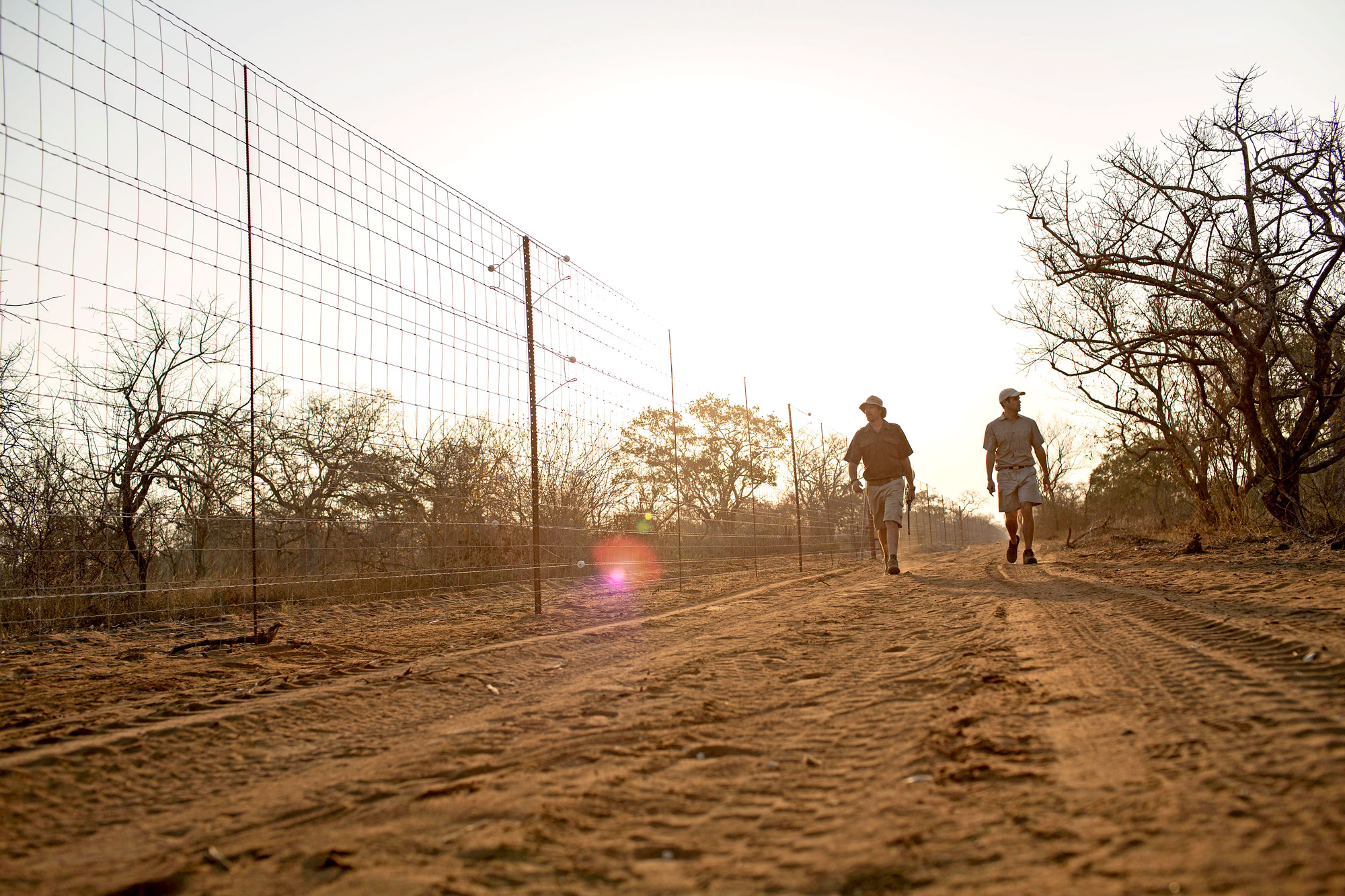 Karingani does not just exist on paper – it’s a real place, where real progress has been made – and continues to be made, every single day.

Of the land set aside with Karingani for building, 40% has been earmarked to reman undisturbed so as to soften the impact of lodge and residential buildings. Karingani’s rules specify how each structure will be built, what materials can be used, and include guidance on reducing the visual impact of human structures. Natural materials from managed, sustained sources will be used wherever possible, and all buildings will be designed and constructed to fit around natural features such as koppies and streams. It’s a reminder that all of us are guests here at Karingani – or rather, that we are stewards, charged with preserving the integrity of this vital ecosystem for future generations. These guidelines have been put in place to ensure the aesthetic and ecological integrity of even the built environment portions of Karingani.

Poaching was historically an issue in Karingani, and had to be addressed. Some 40 additional field rangers are being trained to increase the Karingani ranger force from 1 per 53km2 to 1 per 22km2. The deployment of these additional rangers will act as a deterrent to would-be poachers, and also serve to discourage any form of illegal activity in Karingani. Additional rangers will be able to assist with operational roles including anecdotal and structured game counts, as well as gathering research data that can inform the Karingani management plan. Crucially, the creation of new ranger posts means additional economic and skills-acquisition opportunities for people from neighbouring communities. Karingani’s anti-poaching edge has been honed by recruiting former poachers – who often have exceptional bushcraft skills – to join anti-poaching patrols. Transforming poachers into protectors provides them with a much safer and more consistent to way to earn a living, and provides a viable economic alternative to illegal wildlife harvesting.

Karingani currently has a permanent staff of some 170, made up of representatives of 10 different neighbouring Cubo communities. Additional short-term, project-specific jobs are created as work progresses, and these needs are again largely met by recruiting from local villages. An estimated 1 000 permanent tourism sector jobs will be created once Karingani’s ecotourism lodges are in operation, with many hundreds of others during the construction phase. During every stage of the project, multi-dimensional skills transfers will be initiated, with local stakeholders acquiring hospitality and business skillsets, while traditional skills (and their cultural significance) will be retained and celebrated. The long-horizon visions of the founders of Karingani will ensure that the jobs created are primarily permanent, and long-term – and will present our neighbours with more diverse and secure revenue streams.

Economic self-sustainability has been promoted through the establishment of a farming project near Massingir Dam, which has empowered community stakeholders to cultivate their livestock and sell their surplus crops. This has helped improve both the nutritional and financial situations of participants, while a planned commercial agriculture system will yield scientifically-farmed and irrigated maize crops for sale to Karingani and nearby communities. This new approach to food security is also linked to Karingani’s sustainability ethos. Throughout Karingani, at both residential and commercial properties, rainwater collection will be encouraged, and an organic waste composting and reuse programme will be implemented. These resources can then be used to fuel growth (literally) in microenterprises based on agriculture.

Progress has already been made with community and socio-economic upliftment through the building of schools, hospitals, shops, community halls, boreholes, solar pumps and toilets. direct access to potable water has been provided to thousands of stakeholders, and plans for a 70km pipeline from Massingir Dam to Karingani’s southern boundary are already advanced. This trans-Karingani pipeline will service seven additional communities to the south of Karingani. The next phase of community infrastructure improvement will see teachers’ housing and a maternity ward being planned, to improve neonatal and early childhood development outcomes. Top-down management plans have been specifically avoided at Karingani, and ownership transfer will be a key feature of stakeholder economic empowerment. One of the most exciting projects in the building of Cubo Community Lodge, an ecotourism venture in partnership with the community that will be 30% community-owned and which will create some 20 permanent jobs.

Part of Karingani’s appeal and beauty is its remote location, and great pains have been taken not to compromise the authentic sense of getting away from it all. At the same time, successful ecotourism ventures depend on access, and better links to Mozambique’s transport infrastructure would open up new opportunities for our neighbours, including better access to education and healthcare. To these ends, the airstrip at Massingir will be upgraded and some 215km of internal road network will be constructed to facilitate controlled access. In addition, some 600km of game drive tracks will be created to permit closer viewing of wildlife.

Securing land use rights has been a key feature of the success of Karingani, and has necessarily been a priority at the start of this net chapter of the Karingani story. The 150 000ha of land within Karingani is made up of 24 individual titles held in DUAT land use rights. DUAT is a means provided by the Mozambican government (in the absence of the right of private land ownership in Mozambique) whereby land can be used and benefitted from. Each DUAT – Direito do Uso e Approveitamento da Terra – permits buildings, infrastructure and improvements to land (but not the land itself) to be mortgaged or sold. Within Karingani, some 132 330ha are held within DUATs. 105 549ha of land has been secured, with 44 344ha still subject to final title sign-off. Of this 44 344ha Ha, 18,078 Ha has been approved and is pending the title deed. A Development Node for lodge/residence development (and ultimately, annual levy revenue generation as part of the Karingani funding model) has been ring-fenced.

In many ways, the single continuous thread running through the Karingani story – or at least of the current chapter – is fencing. Our attitude to each fence is governed by is location. On Karingani’s eastern boundary, wildlife fencing is necessary for security (anti-poaching) and for preventing human/wildlife conflict. To this end, a new cutline has been created and a 120 Km Game Fence on has been successfully erected (subject to final ‘Valley’ completion). As the rights are secured to each new parcel of land are secured, any fence separating individual blocks of land from the main portion of Karingani is removed, to assist with ecosystem continuity and to facilitate the free movement of wildlife. Most importantly, all fences will be removed along the 72km western boundary with the Kruger National Park as part of our commitment to the wider goals of the GLTFCA, of which Karingani is proud to be a part.

Sensitively designed and installed game reserve infrastructure has been added to Karingani. Each new project, whether large or small, must be of net benefit to Karingani, its ecosystem, people or wildlife. Reserve management and security have been facilitated through CSU and Security Building improvements and new builds, while boreholes, solar panels and supporting road and link infrastructure have improved access and facilitated reserve activities at many levels. The construction of the Sungulo Lodge Sales Pavilion has demonstrated the immense potential of Karingani to both residential and ecotourism interests.

The attention garnered by Karingani is already contributing to a positive repositioning of Mozambique as a brand and as a destination. Karingani is distinctly Mozambican: we celebrate Mozambique’s culture, languages, art and identity in everything that we do. Mozambique’s post-colonial history has been troubled at times, but the future is bright – and Karingani represents a unique opportunity to be a part of this national renaissance. By involving the Mozambican government as a stakeholder, we have ensured support for Karingani at national level. Equally important is the way that local communities are now invested in the success of Karingani.